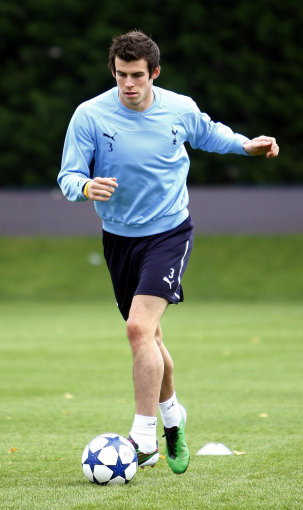 It may have escaped your notice as it seems to have slipped under the radar, but Tottenham winger Gareth Bale has stumbled upon a decent patch of form of late – having almost single-handedly destroyed Champions League holders Inter Milan over two ‘legs’ during the past fortnight or so, as well as putting in some considerable domestic performances to boot.

This aforementioned form has seen Bale linked with some of Europe’s elite over the past few weeks, with Inter, Barcelona and Manchester United all openly fluttering their eyelashes across the smokey haze of the honky tonk at the Welsh winger.

However, Spurs manager Harry Redknapp has once again reiterated that he has no intention of parting with Bale despite fees of £40 million being mooted, as the club are under absolutely no pressure to sell him:

“As far as selling him goes, the people who own Tottenham are not poor people. They don’t need to sell him

“I don’t think Gareth needs to go anywhere else to play his football. He needs to stay here at White Hart Lane.”

Referring to Bales’ formidable showing against Inter last night, Redknapp was glowing with praise, although stopped short of directly comparing him with the world’s best players:

“What confidence you must have as a player when you can come and do that to people who are so highly rated.”

“He’s a different sort of player [to Cristiano Ronaldo]. Ronaldo’s a fantastic player, an amazing goalscorer. This kid is just improving, improving. He’s just getting better and better.”

Amen to that. And to think, he came so close to joining Forest last season.