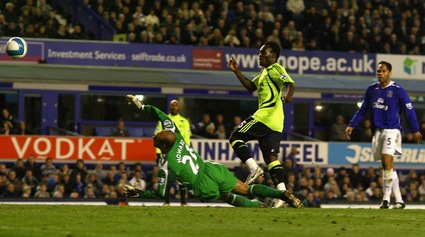 EVERTON 0-1 CHELSEA
Chelsea goal Essien 41
The title race is still alive, thanks to a gritty performance by Chelsea. Winning at Everton is no easy feat, so Avram Grant’s team deserves a lot of credit for scratching out a result, especially without Didier Drogba, Michael Ballack or Frank Lampard in the line-up. Everton, for their part, lacked both energy and invention. Alex Ferguson will no doubt be on the phone today (if he hasn’t already), bending the ear of mate David Moyes – “F**kin’ hell Moyesey, all you needed to do was draw and my team wins the league!’ Chelsea are now just two points behind Man Utd in the table, although United have a game in hand and vastly superior goal difference.
Everton reaction “We didn’t play well enough to win the game.” (David Moyes)
Chelsea reaction “We controlled the game. We had chances to make it 2-0 or 3-0 but our last pass was a bit sloppy. We scored a fantastic goal though.” (Avram Grant)
Man of the match Michael Essien. The Ghanaian scored a neat goal and was clearly the best player on the pitch.
Watch the goal here – be quick, it might not be up on YouTube for long.