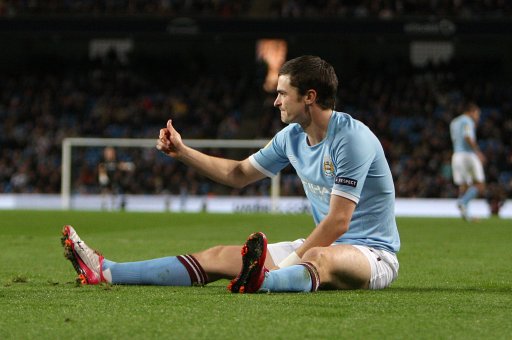 Manchester City winger Adam Johnson has admitted that he is already entertaining thoughts of leaving the club, after becoming increasingly frustrated with his bit-part role at Eastlands.

Speaking at the opening of a new Nike store in Manchester, Johnson said:

“Every footballer has to think about it when the time comes. It is still early but I definitely would consider it.”

Although he was desperate to start, the 23-year-old England international was introduced into the recent Manchester derby with just 15 minutes remaining:

“It is disappointing when you are not playing from the start in games like that. I was itching to get on. I was dying to play from the start not just come on.

“The manager has to make decisions but I was gutted to be left out. With the players we have it will be a rotation but I am full of confidence and I just want to be playing.

“I have got to train and get on with it, nothing is going to change. I have to keep the right frame of mind and get in the team because I want to play for the national team as well.”

Looks like Man City’s relentless sky-blue meat grinder may be about to claim yet another victim. Johnson only joined City in January of last season, and his occasionally fleeting form since will have seen his value indefinitely rise despite a relative lack of appearances.

Most Premier League sides (and I dare say a few others around Europe) would snap up Johnson, a truly effervescent player at his best, in a heartbeat and it would be very foolish of City to let such an obvious talent slip through their fingers.

However, if the overly-cautious Mancini can’t find room to accommodate him in the starting XI then I’d much rather see him freed as soon as possible, as it seems that being left to congeal on the bench at Eastland is his only other option at present.