The world’s best player (two years ago) to link up with Darius Vassell? My mind is boggling 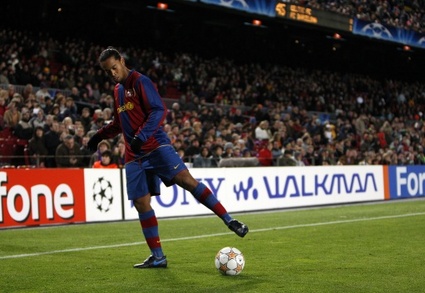 If Ronaldinho ends up at Eastlands, it will be the biggest transfer coup in Premier League history, perhaps in the whole history of football. That’s not to say that Man City are a small club, but if you were to compile a list of clubs that could potentially sign the Brazilian from Barcelona, it would look something like this: AC Milan, Inter, Chelsea etc. City’s name wouldn’t figure at all.
But it could happen.
According to the Guardian, “extensive talks over the weekend concluded with Ronaldinho mulling over a contract (with City) that would make him the best-paid footballer in the world.”

That would put Ronaldino on almost Â£200k a week, a figure that is astonishing in its own right, but even more so when compared with City’s modest wage structure – how would City’s players feel, knowing they were paid so much less than their new team-mate?
In my opinion, City would be mad to sign Ronaldinho, whose powers are on the wane. They’d be much better off signing four or five good young players (scouted from Euro 2008), and sticking them on Â£40k a week. Smashing their wage structure is asking for trouble, and a long line of disgruntled players outside new boss Mark Hughes’ office door.
The last thing City want is to go down the Newcastle Utd route, where players are signed to “excite fans”, or “because the loyal fans deserve a big name”. That is no way to run a Prem club, as more level-headed Newcastle fans will attest. Man City have a star in their eyes, but such a teenage crush is unhealthy – yes, City’s global profile would soar and they would sell a few more shirts, but so what?
Ronldinho’s attitutude in the past couple of seasons with Barca has shown that he’s not to be trusted. He believed his own hype, and it has cost him a place at the top table in football history; two years ago, I believed that he could join the likes of Pele, Maradona and Cruyff in the short list of genuine all-time greats – that now seems unlikely.
Do you also think City are mad to consider such a move?