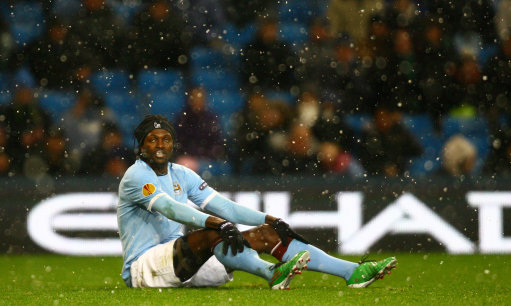 No doubt thanks to this infernal snow, transfer gossip is a little thin on the ground this morning – so hearty thanks must go out to the Daily Mirror and their bumper seven-pronged doozy of a rumour.

After 17 months of unswerving loyalty, the Mirror are claiming that nigh-on-unlovable Manchester City striker Emmanuel Adebayor is ready to ‘dig in his heels’ and force a January loan move to Tottenham.

Adebayor is reportedly confident that, as well as convincing City to let him move to one of their closest rivals, he can also persuade his current employers to continue paying half of his £120,000-a-week wages – so as to fit into Spurs’ strict wage structure.

With Arsenal fans twice-jilted and the Spurs faithful pathologically averse to ex-Gunners, can you just imagine the bloody blue hell that would emanate from both sides of the North London divide should ‘Manu’ pitch up at White Hart Lane? Please, please, please Allah let this happen!

As for those other six prongs I promised you?

Well, the Mirror have also taken it upon themselves to find suitors for some of City’s less prominent dead wood, by claiming that Shaun Wright-Phillips is almost definitely off to Aston Villa in January, forgotten striker Roque Santa Cruz will have to pick between Blackburn, Lazio or Espanyol, Shay Given will be the subject of a bidding war between Manchester United and Fulham, Pablo Zabaleta will be allowed to join AC Milan and wastrels Jo and Michael Johnson will just be released back into the wild without fanfare.