Some links to feed your mouse with 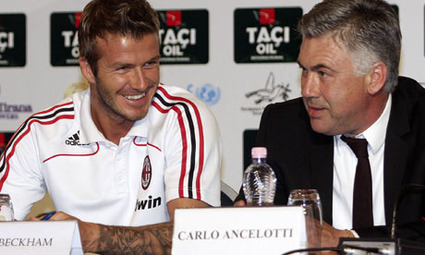 1. David Beckham to follow Carlo Ancelotti to Chelsea. Hmm, Becks has no loyalty, so yeah, I could see that… [@ BigSoccer]
2. Ribery, Villa or Aguero (or all three)? How Chelsea should spend Roman’s millions. [@ The Game]
3. Why Gerrard and Iniesta are better than Messi and Ronaldo. [@ SoccerLens]

4. Celtic pays tribute to the late Tommy Burns. [@ 101GreatGoals]
5. Fergie predicts Fabio Capello will include Danny Welbeck in England’s squad for the 2010 World Cup finals. [@ Republik of Mancunia]
6. It’s boys’ week over at Kickette. Introduced by Dimitar Berbatov aka “The Continental”. [@ Kickette]
7. Lucas Neill set to quit West Ham after turning down a new one-year deal on reduced terms. Well, he’s no Bobby Moore. [@ Mail]
8. Manuel Pellegrini will take over as the new coach of Real Madrid this week after a deal with Villarreal was reached. What next for Juande Ramos? [@ Goal]
9. Garth Crooks’ team of the season includes John Terry. Don’t laugh. [@ BBC Sport]
10. Florent Malouda’s recent good form down to his lack of wisdom… teeth. [@ Off the Post]
Oh, and follow Pies on Twitter