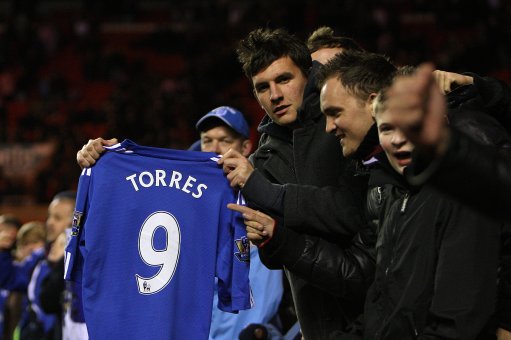 Lovely colour, but does it burn easily?

According to the Daily Mirror, Chelsea are set to recoup the whopping £50 million they splashed out on old ‘Dodgy Hamstrings McGraw’ on Monday in a matter of months, thanks to a massive surge in sales of ‘Torres’ replica shirts in the West London area.

The Mirror have the initial facts and figures:

“Chelsea’s record £50 million signing Fernando Torres is already king of the shirt sales – outselling his ­Liverpool replacement Andy Carroll by 250 jerseys to one.

“Demand for Chelsea’s new Torres home shirts are currently 40% higher than when he arrived at Anfield three years ago, according to suppliers.

“Shirt sales for the Kop’s other new striker, Luis Suarez, are 380% more popular than Carroll replicas, but are still trailing behind Chelsea’s Spanish signing by 30 to one.”

Given that it took just six months for sales of Cristiano Ronaldo’s Real Madrid shirt to pass the 1 million mark in the Spanish capital alone, and the fact that Torres has topped the table for Premier League shirt sales for the last two seasons, Chelsea should break even on their £50 million investment in…ooh, about three weeks time!