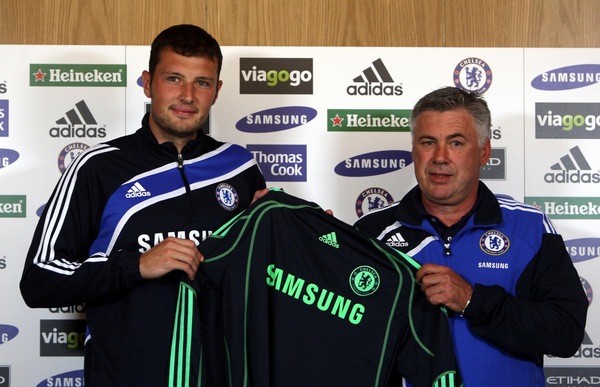 ‘I thought being Chelsea manager would be more glamourous than this.’
Ross Turnbull is the first signing of the Carlo Ancelotti era. The English goalkeeper, 24, was signed on a free transfer from Middlesbrough.
But I wonder if Ancelotti had anything to do with this transfer, other than to approve it. Apparently Chelsea took an interest in Turnbull last season, so he can’t be considered an Ancelotti signing.
I had to laugh at the Wikipedia entry for Turnbull, which assumes that there is a very logical reason behind the signing of a player who will see almost no first-team football next season. The entry goes:

‘On 2 July 2009, Turnbull joined Chelsea FC in a cunning ploy for Chelsea to overcome a new homegrown players rule from UEFA in which 8 homegrown players have to be named amongst a 25 man squad for the UEFA Champions league.’
A cunning ploy, eh? How very objective of Wikipedia to say that. It may indeed be true that Chelsea signed Turnbull to boost their homegrown pool of players, but the wording makes it sound as if Chelsea signed Turnbull for no other reason than to make up the numbers. Perhaps that is the case. It seems to me that Chelsea wanted a cheap, English keeper to make it easier to buy expensive, non-English outfielders.
Turnbull is a talented young keeper, but he is now a talented third-choice keeper and you wonder if at 24, it’s the best move for his long-term career.
EDITED I see Turnbull’s Wiki entry has since been changed to the more mundane: ‘On 2 July 2009, Turnbull joined Chelsea on a free transfer, signing a four-year contract.’
Very fast work by the Wiki police.