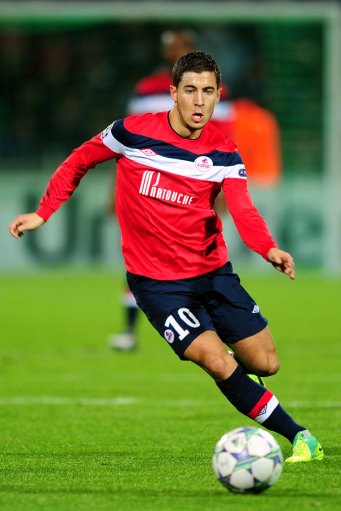 Belgian wing-wizard Eden Hazard has been linked with pretty much every big club in Europe over the last year, and now his club, Lille, have decided that the attacker is up for sale, albeit at a rather high price.

£43 million will get you the services of the fleet-footed 20-year-old, a figure which will probably put Arsenal, who have been consistently linked with the player, out of the running.

Lille president Michel Seydoux said: “The price is 50million euros – and we’d like to make that clear in advance. We are at a stage when the club is having discussions about what to do. It depends on the offers we get. Nobody is unsellable. We would be able to look for replacements with the money we would receive.”

The likelihood is that he’ll end up either in Spain with Real Madrid or in Italy with Internazionale, although with Chelsea struggling at the moment, Roman Abramovich might get out his cheque book in January to appease the crowd, and give AVB one last chance.

With Man City’s massive squad, a move to the Etihad looks unlikely too while Sir Alex Ferguson already has Young, Nani and Valencia on the flanks.

Maybe Doncaster Rovers will splash their cash and make a bid?

Here are some of Hazards’ best bits so far…