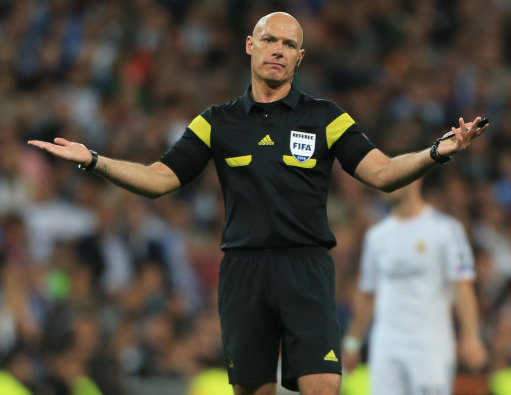 “Come on Nigel, in the chest? Seriously?”

After 25 years in the business, Howard Webb has announced that he has hung up his whistle, handed in his cards and retired from professional refereeing.

Webb retires from active duty just ten days before the start of the Premier League season, but the former copper will still be involved with officiating after being appointed technical director of the Professional Game Match Officials Board.

Which squad number will Manchester United retire in Howard Webb’s honour, then? Answers on a postcard, please.

All jokes aside (and there are hundreds; mostly vaguely similar Manchester United-related ones), Webb was one of the best referees in the country and deserves all the plaudits he’s been given over the years, including being entrusted by FIFA to oversee the brutal 2010 World Cup Final between Spain and Holland.

Fair play to the guy. We’re not overly enamoured with the whole “celebrity referee” thing, but he did what he did well.

He’s also the only referee we’ve ever seen tuck away a Panenka-style penalty, so for that we thank him too…