Sunday’s Coppa Italia fixture between Serie B twosome Avellino and Bari was marred by yet another biting incident which saw Avellino striker Gianmario Comi allegedly sink his gnashers into the arm of Bari forward Giuseppe de Luca while the pair scuffled while lining up a defensive wall.

It’s admittedly difficult to pick anything out from the grainy footage available, but what is clear is De Luca’s furious reaction after scuffling on the floor with Comi – a furious reaction that actually saw him sent off by the referee for dissent!

Sod’s Law being what it is, Comi then went on to score the equaliser as Avellino emerged as 2-1 winners.

Still livid at the injustice of it all, Bari then used their official website to post photos of De Luca’s wounds after the game, with the images appearing to show red bite-marks on his elbow… 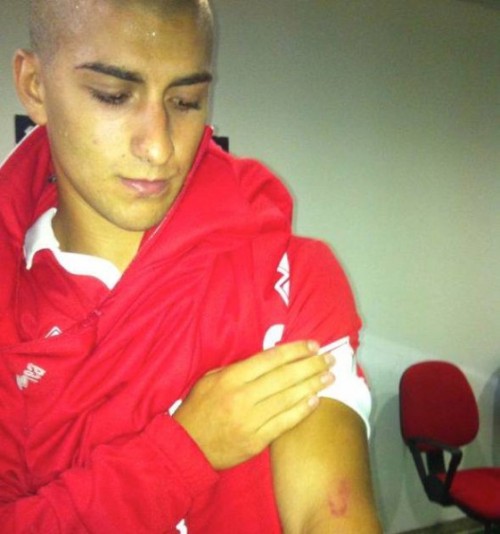 “I had the wrong reaction and I apologize to the club, my teammates and the fans for leaving the team with ten – but I never expected to receive a bite from an opponent.

“Aggression is part of the sport, but vile episodes such as biting or spitting should not be tolerated.

“I ​​regret that on the pitch I overreacted and I was wrong.

“A player of my experience should not fall into traps like this, but I was surprised by the gesture of Comi.”

We can’t help wondering: Are Italian footballers particularly tasty or something?