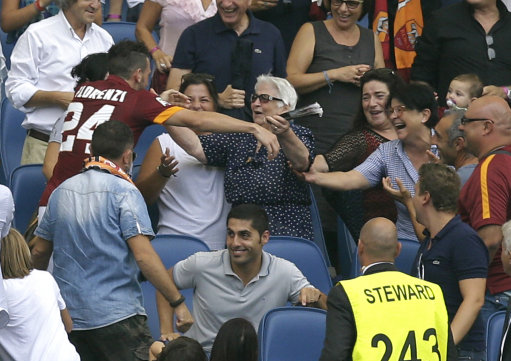 Roma midfielder Alessandro Florenzi scored his very first goal of the season by putting the Giallorossi 2-0 up against Cagliari earlier today, with the 23-year-old choosing to celebrate his maiden strike of the campaign with a very special person among the crowd: his dear old nonna!

Having thrashed the ball home, Florenzi went yomping up into the terraces and gave his grandma a great big hug – reducing the poor woman to tears live on television…

However, Florenzi did find himself on the receiving end of a callous yellow card from the referee once he re-emerged. Rules is rules, after all.

Speaking after the game, the Roma man was asked about his celebration by journalist/Calcio shaman James Horncastle.

Florenzi on celebrating goal with his grandma: She told me: “I’m only coming to see you but only if you come over and say: ‘Hi’.”