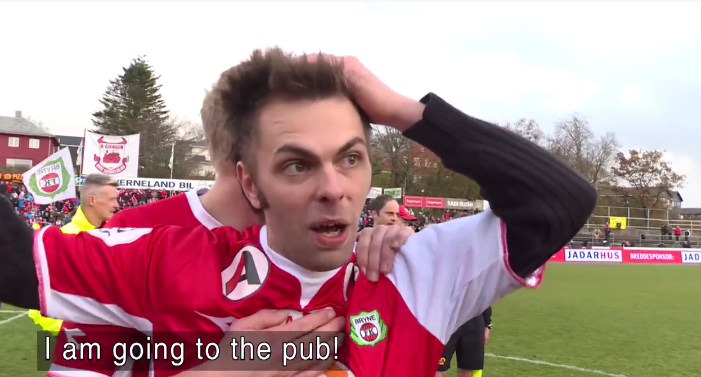 There were joyous scenes at Byrne FK over the weekend as the Norwegian second tier side successfully managed to fend off the drop with a dramatic win over fellow relegation candidates Baerum on the final afternoon of the season.

Byrne won the game 2-1 despite having a man sent off in the first half, with the result duly consigning Baerum to the drop in their stead.

It all proved too much for one Byrne fan, a chap by the name of Bjorn Serigstad Ege, who has become something of a social media sensation in his native land after struggling to keep it together in a post-match interview.

As the Byrne supporters flooded onto the pitch at the final whistle, Bjorn was stopped by the NRK cameras and asked for his reaction.

Wide-eyed and quite obviously in a state of pure delirious shock, the farmer simply uttered: “If my wife is watching: she has to milk the cows, I’m going to the pub.”

And who can blame him?

As stated in the video, Bjorn gave a second interview to NRK off-camera in which he confirmed that his wife did indeed milk the cows as requested, though he was forced to do it on the morning after the big game.

We can only imagine the smell of a milking parlour does wonders for a hangover.