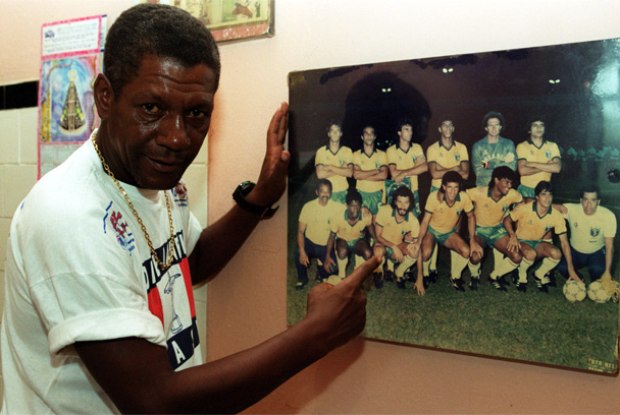 Marinho and a photo of himself, bottom left, as part of the 1986 Brazil team (Photo: O Curioso)

There was a time when Mario Jose dos Reis Emiliano (‘Marinho’ to his friends) was considered one of the very best, most exciting players in Brazilian football.

Marinho’s peak came during what proved to be the last flush of prominence for his club at the time, Bangu Atletico Clube, as they finished runners-up in Serie A in the 1985/86 season and their fleet-footed right winger ended the campaign with the Golden Ball award, given to the best player as decided by Placar magazine.

It was around this time that Marinho caught the eye of Brazil coach Tele Santana, who called him up to the 1986 World Cup squad and went onto award him every single one of his 15 international caps.

Never more than a fringe player for his country, the skillful wideman only ever scored one competitive goal for la Selecao – but by Jove did he celebrate it in style…

Frankly, you can stick your multiple backflips, your silly love-hearts and your tattoo kisses where the sun don’t shine.