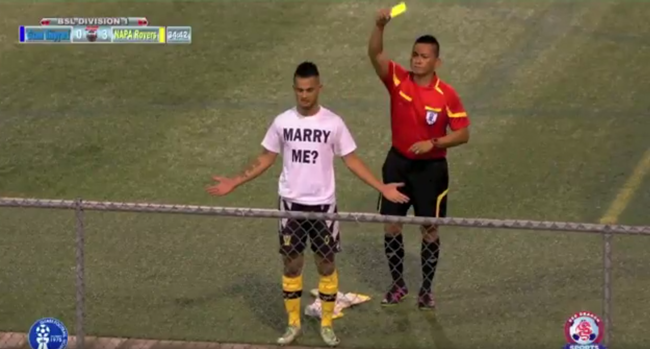 We don’t think we’ve ever featured the Guam Budweiser Premier League here on Pies, so it’s nice that we get to kick things off with a good’n.

NAPA Rovers brought Guam Shipyard’s unbeaten streak to an end on Saturday with a 5-1 win in their first game back after the Christmas break.

Ashton Surber found himself amongst the scorers, but the NAPA striker’s evening was all the more notable for a different reason.

After tucking away a spectacular overhead kick in the 35th minute, Surber rushed over to his girlfriend in the crowd and unveiled a t-shirt with the words “Marry Me?” splashed across the front.

Sadly, the over-officious referee wasn’t in the mood for grand romantic gestures and swiftly booked Surber for removing his shirt…

#ICYMI When your life goals come together w/your soccer goals – a bicycle kick goal and by a proposal to now fiancee https://t.co/fPDv85hvNC pic.twitter.com/E6UjUyZGOd

Quite right, if we start letting minor offences slide in the name of love then how long will it be until we’re living in total anarchy?