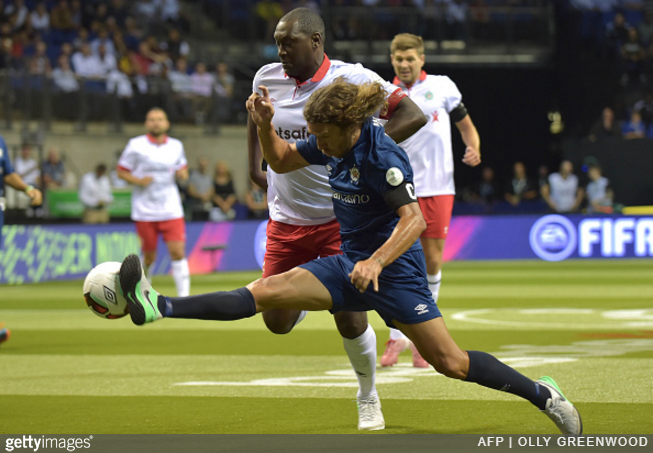 Thursday night saw the inaugural Star Sixes legends tournament kick-off in London, with an entire constellation of veteran footballing talent descending on the O2 Arena for the occasion.

As well as hosts England, teams of legends from Spain, Scotland, Mexico, Brazil, Italy, Nigeria, China, Denmark, Portugal, Germany and France were also in 6-a-side action on the opening night.

Indeed, it was Michael Owen who scored the first goal in Star Sixes history, putting England 1-0 up against Spain before La Roja came roaring back to win 4-1 in the first 30-minute match of the evening.

The historic first goal at #StarSixes last night was scored by @themichaelowen, but his England team lost out 4-1 to #Spain #ENGSPA pic.twitter.com/QO0F7hGM4F

The true highlight of the encounter, however, was seeing Carles Puyol absolutely wipe Phil Neville out with a trademark thunderous lunge.

In fairness, the tousled ex-Barcelona captain made a point of apologising to Neville directly after the match.

You don’t mess with Carles.

Elsewhere, Brazil’s ridiculously strong side, which includes Rivaldo Roberto Carlos and Gilberto Silva, beat Italy 2-1 in a match-up that saw Juninho and Fabrizio Ravanelli reunited on a pitch for the first time since their Middlesbrough days…

Scotland also got off to a win over Mexico, while Michael Ballack’s Germany edged out France in a tense 4-3 victory.

The other matches saw Nigeria beat China 3-2 while Denmark recorded a 6-4 victory over Portugal.

The second round of group ties are all due to take place tonight.