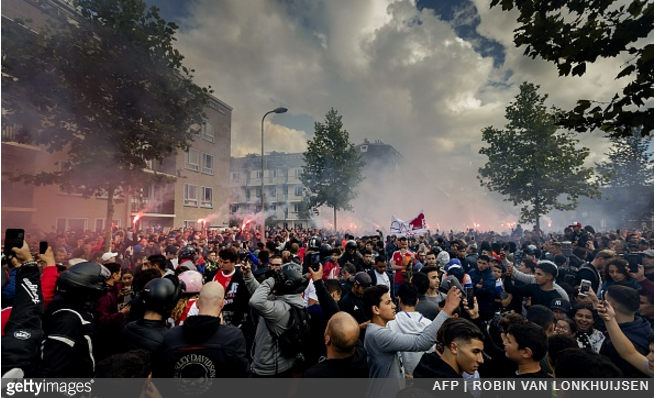 Legions of Ajax fans assembled outside the family home of Abdelhak Nouri to stage a mass show of support for the young midfielder who collapsed during a recent match.

Nouri, known as Appie, passed out on the pitch during a pre-season friendly against Werder Bremen in Austria last week, with Ajax subsequently confirming the 20-year-old has been left with “serious and permanent” brain damage after suffering cardiac arrhythmia.

Appie was rushed to hospital in Innsbruck before being transferred to Amsterdam for further tests and treatment.

In solidarity, thousands of Ajax fans then flocked to his parents’ house in the Geuzenveld district of the Dutch capital to chant Appie’s name, light flares and unfurl banners professing their support for the stricken player.

Nouri’s brother Mohammed even appeared at the window to thank the fans for their overwhelming support.

Speaking to the local press, Mohammed was forced to give a bleak update on his brother’s condition:

The longer you wait, the better they can perform some tests. Yesterday morning the doctors did another test. The base of the brain is mostly damaged and is not functioning.

According to the doctor he can never do all that again, he will never heal.

I trust Allah.  Should it be like that in the end, I will accept it.

He is a great guy. Everybody, the whole world, is talking great things about him.

Here’s wishing Appie and his family (both sporting and immediate) the very best.