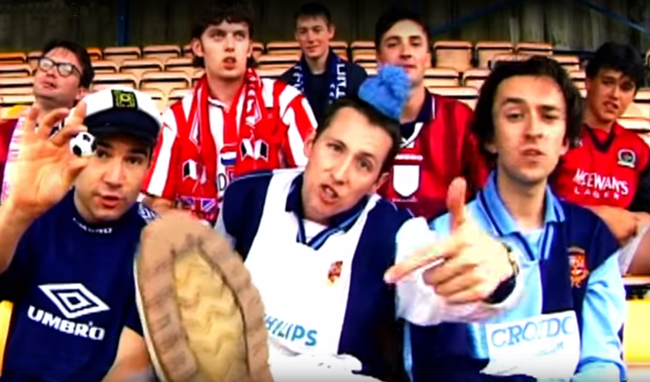 It’s about this time every year that Pies’ inbox gets overrun by a deluge of the worst kind of email: the brazenly tenuous PR football-tie-in advertorial.

Just before the start of each new season (World Cups are also equally insufferable), brands and companies with no connection to football attempt to shoehorn themselves into the equation on the most dubious of pretences.

With footy season approaching, Styffes Funeral Directors are hoping to score big with a new range of marble headstones…

Tedious admin aside, our major gripe lies with the word ‘footy’, ubiquitously trotted out by these people – people who have no interest or understanding of football fandom and all the inherent misery and suffering it entails.

What’s more, on hearing the word ‘footy’, we can’t help but start humming ‘The Footie Song’ from the Adam & Joe Show – a deliberately and brilliantly banal football ‘anthem’ written and recorded by two blokes who couldn’t care less about the sport.

Glenn Hoddle is having a goal!

Adam & Joe’s Footie Song perfectly lampoons both, A) non-football people desperately trying to pass themselves off as football people, and B) every hackneyed Three Lions-aping football-song-by-committee churned out from the mid-1990s to this very day, both official and unofficial.

After all, we all know there’s only one true football song…