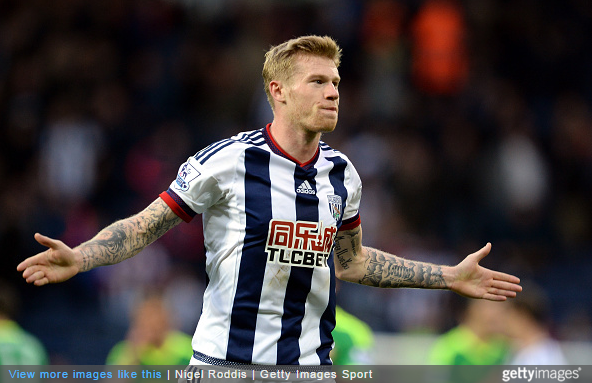 With Remembrance Day coming up in November, West Brom winger James McClean has taken preemptive steps to help diffuse the inevitable controversy that continually surrounds his refusal to wear a poppy stitched onto his shirt.

To the vast majority of Europe, the Poppy stands as a simple symbol of commemoration and appreciation for the men that gave their lives while fighting for their country. However, ask the Catholic/Nationalist population of Northern Ireland what the Poppy symbolises to them, and you’ll probably find you get a rather different answer altogether.

McClean was born and raised in Derry, the scene of the 1972 Bloody Sunday massacre – so it’s perfectly understandable that he might not feel like commemorating the British army’s handiwork. Emotions are still very raw in Derry, with most of its population little more than a generation removed from The Troubles.

The winger’s political stance has caused friction before, with his refusal to wear a poppy causing rifts on several previous occasions. He also declined to face the Union Jack or sing the British national anthem on West Brom’s pre-season tour of the United States.

Anyway, with another needless shitstorm on the horizon, McClean wrote an open letter in the official match programme for the Baggies’ game against Sunderland (throughout which he was goaded with chants about the IRA by the away fans) at the weekend, once again clearly outlining and explaining his decision not to wear the poppy emblem:

People say that by not wearing a poppy, I’m being disrespectful but they don’t ask why it is that I choose not to wear it.

If the poppy was simply about World War One and Two victims alone, I would wear it without a problem. I’d wear it every day of the year if that was the thing, but it doesn’t, it stands for all the conflicts that Britain has been involved in.

Because of the history of where I come from in Derry, I cannot wear something that represents that. I have no issue with people that do wear the poppy. I absolutely respect their right to do that but I would hope that people respect my right to have a different opinion on it too.

If I were to sing the British national anthem, that would be disrespectful to the place I come from, to Derry, to my family, because the anthem represents something in recent history that caused a lot of conflict and pain there. A lot of people are still hurting there so I can’t pretend that didn’t happen.

Again, I will stand there in silence while the anthems are played. I will respectfully allow others to sing it. I won’t interfere, but I can’t take part in that.

The people that love the anthem are British, that’s their culture. I totally respect that, that’s great. I wouldn’t ask them to sing the Irish anthem.

My attitude is live and let live, and I don’t think we should have ideas forced on us just as I don’t want to force my ideas on anyone else…I have to stand by my principles.

Perfectly reasonable, you might think. McClean is being intelligent, careful and concise in full knowledge of what’s surely coming in a few weeks’ time.

Let’s see if he manages to get the message across this time, eh?

Incidentally, West Brom boss Tony Pulis referred to McClean as “not the sharpest tool in the box” after he aimed an over-zealous fist pump or two in the direction of the Sunderland fans after Saturday’s 1-0 win at the Hawthorns.

The FA have today warned the winger over his future conduct.