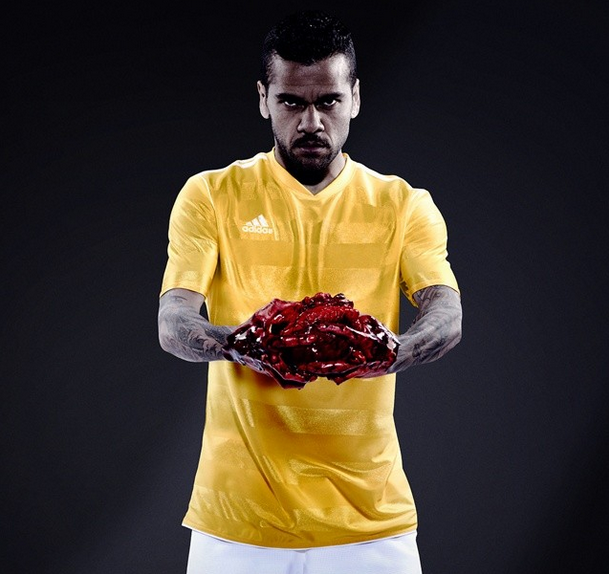 Along with the caption “My heart for my country”, Alves posted the above photo up on Instagram yesterday of himself looking all moody and menacing while holding a gelatinous, disembodied cow heart for the new Adidas “All In Or Nothing” promo campaign.

As well as a slew of queasy looks and arched eyebrows across the globe, the adverts have been admonished in Adidas’ native Germany, with German animal rights campaign group Four Paws admonishing Podolski for appearing in them.

According to the Daily Mail, a spokesperson for Four Paws said:

“[Podolski] says he’d give his heart but it wasn’t his heart was it? It was the heart of an innocent animal. If this was supposed to be some sort of PR stunt, then it misses the point.

“It’s bad enough that animals are slaughtered for food but to parade a heart, dripping blood and gore, is hardly a good way to advertise a sporting goods firm.”

Quite so, though Podolski defended the adverts by claiming that he actually would be happy to tear his beating heart from his own chest for his country:

‘I don’t find it disgusting,” Podolski said. “It just shows my promise to give my heart in our bid to win the World Cup. I and the rest of the team will give it all for Germany.” 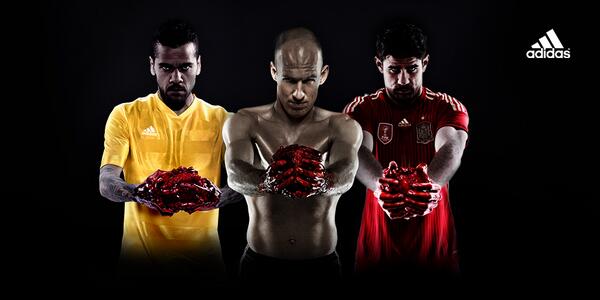 How far will you go? I will give my heart for my country. #allin or nothing. pic.twitter.com/QrPCfu7CYL

Frankly, Adidas’ campaign is all a bit too unnecessarily gory for Pies’ liking, but it’s definitely done the job. People are definitely talking about it, one way or the other.