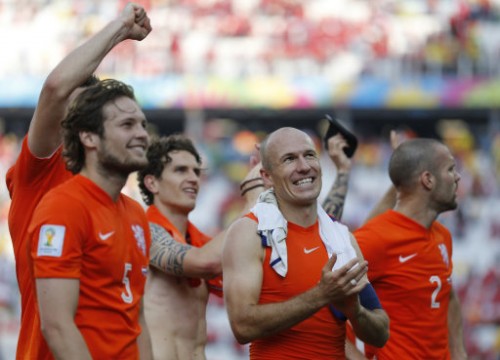 Arjen and the chaps are just four little wins from space

A Dutch aerospace company have promised to let the Holland squad slip the surly bonds of Earth and dance the heavens on laughter-silvered wings, if and only if they manage to win the World Cup.

The pithily named Ruimtevaartbedrijf SXC aerospace engineering company (mercifully known as SXC for short) have promised the reward of a flight into space to Holland’s players in return for winning their next four games after apparently being inspired by watching Robin van Persie “taking flight” to score his spectacular diving header against Spain in Holland’s first game.

“As a company of Dutch origin, we are mega proud of the achievements of Oranje in Brazil. An unearthly performance deserves an unearthly reward!

“We are going to try to take the players literally to a higher level – 103 km!

“[We’ll take] the whole selection of 23 players and of course, Louis van Gaal.”

As NL Times note, SXC are currently working towards offering commercial flights into space from next year so, if everything goes as planned, the Dutch squad could get their celestial voyage in 2016.

As incentives to win the World Cup go, that ain’t a bad’n – in fact you could call it…out of this world!!!