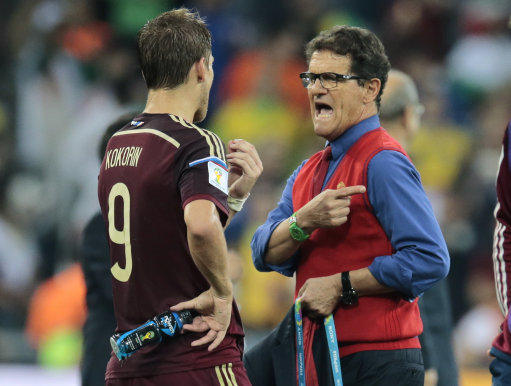 Russia’s disappointing showing at the World Cup has landed manager Fabio Capello in hot water, with the Italian coming under intense criticism for failing to navigate a safe passage from Group H despite being far and away the most highly-paid coach at the tournament.

Controversial and out-spoken right-wing Russian politician Vladimir Zhirinovsky has joined the country-wide Capello-bashing with gusto, branding the Russia coach a “greedy thief” for accepting such a huge salary (£6.6million per year – almost double that of the next highest-paid World Cup coach, Mr Roy Hodgson) and then failing to deliver anything of note in return.

“We need to look into his work and ask him to resign,” said Zhirinovsky in the Russian press, according to the Guardian. “But he’s greedy, so of course he won’t. It’s pretty good to get [millions] for doing nothing.”

“The team lost and it doesn’t affect his pay in any way. Thief! Even the way he looks makes it hard to like him – he looks like a schoolteacher.”

Zhirinovsky was joined in his lashing of the former England manager by fellow MP Oleg Pakholkov, who told reporters he thought Capello’s sole intention was to stock-pile the money for his retirement.

“I think Capello knew very well he would achieve nothing with our team, but he simply decided it was a good way to make money. He wanted to hoover up bundles of cash for his retirement,” Pakholkov said, before adding that Capello should resign from his post and return half of his ill-gotten salary to the Russian taxpayer.

Pakholkov also questioned the physical prowess of the Russia players.

“Look at the size of the Koreans, even they are bigger than us!” he added.

“I’m not talking about Germans or Brazilians, who are obviously giants. Our guys are twice as small as them. I’m not against small players but Capello’s team can’t even run fast. What are they doing in the team?”

Well, at least it’s good to know that the English aren’t alone in being constantly underwhelmed by their national team.