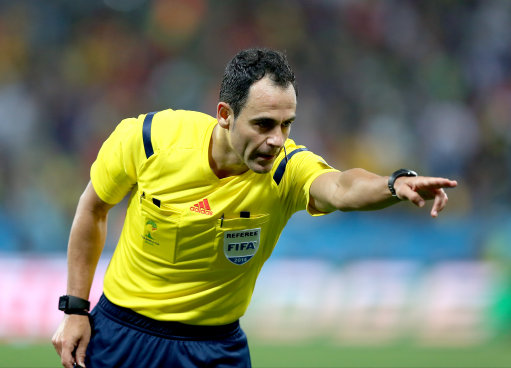 A Colombian gentleman has filed a gigantic lawsuit against FIFA after deciding that the refereeing at the 2014 World Cup in Brazil was so abhorrently abysmal that it caused him to suffer cardiac problems.

Aurelio Jimenez, a 74-year-old lawyer, is suing Sepp Blatter and his cronies for ONE BILLION EUROS (roughly £800million) after the controversial decisions, or lack thereof, made by Spanish referee Carlos Velasco Carballo during Colombia’s quarter-final defeat to Brazil caused him to wind up in hospital with a broken heart.

“I felt very bad, I was heartbroken, my cardiac rhythm was altered and my relatives took me to the emergency room at the hospital.

“I was surrounded by my grandchildren who were crying a lot.”

Being of a litigious persuasion, Jimenez has also collated evidence of the woeful refereeing that peppered the World Cup.

“I decided to sue FIFA in the Colombian judiciary system because in the past world soccer championship in Brazil, there were many wrongdoings related to referees who damaged many countries and their selections, among them the Colombia team.”

Jimenez also claims to have testimonies from Pele, Diego Maradona, David Ospina, James Rodriguez and a slew of international referees who commented on the leniency showed by referee Carballo during Colombia’s game against Brazil, in which the Spanish official let several robust challenges go unpunished including the infamous back-breaking shunt suffered by Neymar at the hands/knee of Juan Zuniga.

Now you might be thinking that Jimenez has merely launched a frivolous, unsubstantiated legal case in the hope of snagging himself a healthy out-of-court settlement from FIFA to make it all go away, but the man himself insists his motives are genuine.

What’s more,  he’s also promised that if he wins the case, any damages received would be donated to an organisation which helps to improve the welfare of Colombian children.

Make of that what thou will!