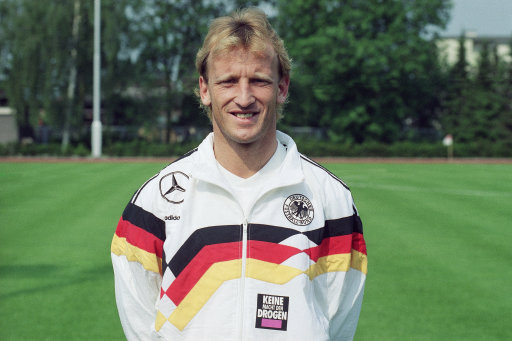 Andreas Brehme was an intrinsic part of the Germany team that won the World Cup in 1990 having scored the winning goal in the final against Argentina, though it would appear that life for the former Bayern Munich left-back is far less salubrious these days.

According to reports in the German press, Brehme got himself into considerable debt after retiring from active duty – last working in football during a short, ill-fated stint as Giovanni Trapattoni’s assistant at VfB Stuttgart in 2005.

Indeed, German newspaper Deutsche Welle reckon that Brehme is still around €200,000 in the red despite previously selling his house to help ease the strain – without much success, it would seem.

Franz Beckenbauer, Brehme’s coach in 1990, has already publicly stated that German football should feel it its duty to rally around the 53-year-old and help him out of the hole.

“We have the responsibility to try and get him out of this situation,” is quoted as saying by Corriere dello Sport.

“He has given a lot to German football and now we should thank him by helping him.”

However, one of Brehme’s former colleagues, Olivier Straube, has extended an olive branch to his former coach at SpVgg Unterhaching by offering Brehme a job at his toilet cleaning company.

“We are ready to take Andreas on in our bathroom cleaning business,” Straube said.

“He will learn that what really counts is proper work and real life.

“It would help him improve his image. To me, that’s help.”

Brehme is now facing a bankruptcy hearing in December and is hoping to improve his situation before then, with Straube’s decidedly unglamorous offer appearing to be the only one on the table at the moment.

Beggars can’t be choosers, after all, but surely the German football family must be able to provide Brehme with something a little less humiliating?

He did win them a World Cup, after all.