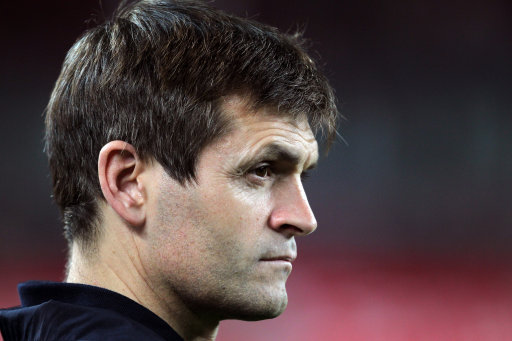 Sam Allardyce, you can stand down now – Barcelona have chosen their new coach. However, rather than hang on for one of the world’s big-name bosses, the Catalans have decided to look closer to home, naming Guardiola’s second-in-command, Francesc ‘Tito’ Vilanova  as their new manager.

So just who is Tito? Well, the 42-year-old grew up with Guardiola at La Masia. However, while Pep went to forge a legendary career with the Barcelona senior side, Catalan-born Vilanova failed to make the grade, instead making a living for himself as a journeyman pro with some of Spain’s less glamorous sides.

After retiring in 2002, Vilanova got some experience on the coaching side of things in the lower leagues before eventually returning to the Nou Camp to assist Guardiola with the Barcelona B team. Then, when Pep took over from Frank Rikjaard with the big boys, Vilanova went along with him.  And now, he’s the man in the hot seat.

Infamously, Vilanova was poked in the eye by Jose Mourinho during a Barca v Real Spanish Super Cup game.  So don’t expect any softening of attitudes in future Clásicos.

While the decision to appoint Vilanova has come as something of a surprise, Barca Sporting Director Andoni Zubizarreta is confident the new man will succeed. He said:

“Tito has been working here with us, so why not Tito? He puts in all the hours until he sleeps and he has the personality that we need to lift us. He’s different to Pep, but Tito’s the one.”

“We’ve always looked in house. We have Tito – it’s simple. We needn’t go out on the market.”

To say that Vilanova will be under pressure to match Guardiola’s huge success is surely an understatement. It’s like Terry Connor and Mick McCarthy all over again.