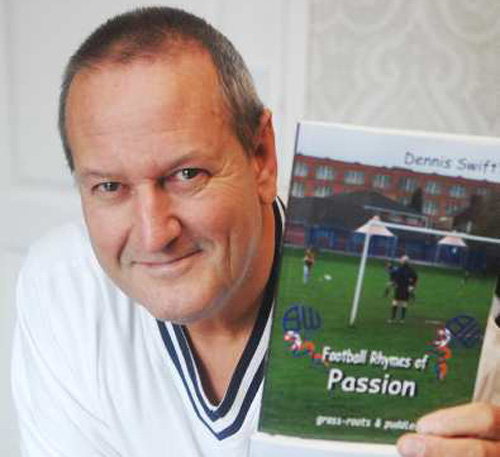 Bolton fan Dennis Swift loves his club but the 56-year-old had become disillusioned by the direction it had taken under manager Owen Coyle. Instead of protesting at the Reebok Stadium, however, the plasterer wrote down all his frustrations in poem form.

Swift then approached the Trotters to sell his book of poetry, “Football Rhymes Of Passion”, in the club shop, but was given short shrift by Bolton. An outraged Swift then penned an online poem which criticised the shop’s head of public sales, Richard Gough (not that one), which ultimately led to a surprise visit from the Old Bill/Filth/5.0.

However, while the club insist the police were only called in relation to the alleged online abuse of their sales guy  Swift himself is adamant that he was fingered for his anti-Coyle odes. He said:

“I’ve written a couple of poems about the manager and put them on the forum after we went down. I have nothing against Owen Coyle, I think he’s a nice bloke, but he is not up to the job.”

“I had also written a book of poems which did not contain the ones about the manager and I asked the club if they would sell them in the shop. They told me they would if I sorted some copyright issues which I did. I ordered a load of copies but then Mr Gough told me they were not going to stock them. That is when I went online and made the comments about him.”

“There were two officers, a man and a woman. They said Mr Gough wasn’t bothered about what I had put on the forum but the club did not like my poems and did not want to write any more.”

However, for a proper take on the bizarre events, you need to check out Swift’s latest poem…

You can check out the rest of it here, if you really want to.