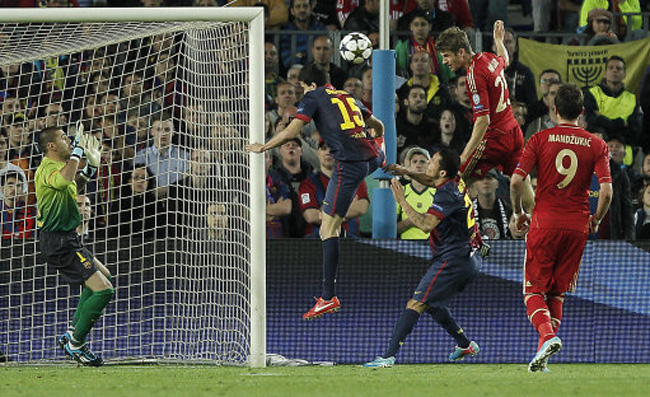 And so Wembley will play host to a rather tasty looking all-German Champions League final at the end of the month, after Bundesliga champions Bayern hammered Barcelona for the second time in a week.

With the unfit Lionel Messi forced to watch the game from the bench, the Catalan giants were always going to struggle to overturn Bayern’s 4-0 first leg lead. However, few would have expected the home side to go down with such a whimper in front of their own fans.

Bayern were in control from the start, allowing Barcelona to feck around with the ball in midfield without doing any damage, although it took the Germans until the 48th minute, when Arjen Robben netted courtesy of a trademark curled effort.

While the Spaniards pushed for a goal, the visitors were always dangerous on the break and eventually doubled their advantage on the night when Gerard Pique shinned a Franck Ribery cross into his own goal. French wingman Ribery then set up Bayern’s third, with Thomas Mueller heading home to rather embarrass the mighty Barca on their home patch.

With Bayern qualifying for their third Champions League final in four seasons, the final outcome of this two-legged tie is hardly that surprising. However, the manner of the defeat and the failure of the Catalans to cope without Messi will have given the Barca hierarchy plenty to think about ahead of next season.