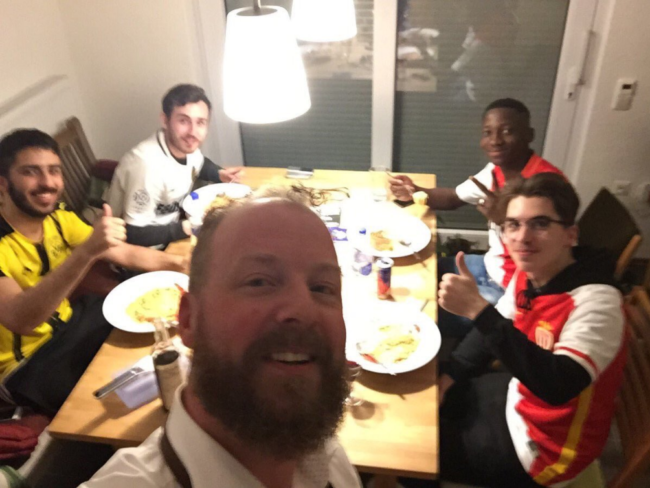 While the enforced cancellation of Tuesday night’s Champions League quarter-final between Borussia Dortmund and Monaco was obviously a distressing turn of events, there did at least emerge from the morass a shining beacon of hope for humanity.

As you’re doubtlessly aware, the match was abandoned after the Dortmund bus was caught up in a series of explosions en route to Signal Iduna Park before kick-off.

Thankfully, nobody was seriously injured and the match was quickly rescheduled for 18:45 the following day, though the upshot was that several thousand travelling Monaco fans were suddenly left stranded in Dortmund without overnight accommodation.

However, within minutes of the match being called off, BVB themselves emitted a Tweet to alert Monaco fans that should they need a place to stay and/or eat, they could use the #BedForAwayFans and #TableForAwayFans hashtags to get in touch with locals who were offering just that.

The Bundesliga side then also announced that they would happily subsidise Monaco fans up to €80 (roughly £70) to stay in hotels in the city should that be their only option.

Sure enough, a raft of photos began to emerge on Twitter of groups of supporters dining and mingling together…

Look at this. Football is wonderful.

Roger (right) took in six Monoco fans last night after the #BVBASM match was cancelled due to the @BVB attack in #Dortmund pic.twitter.com/xHxM8Wo70v

👍 Thanks to all the fans in and around Dortmund for making #bedforawayfans possible last night! #bvbasm https://t.co/48znPI9N80

By George, it’s enough to thaw your cold, cynical heart ain’t it? Truly outstanding work all round.

Once again, without a second thought, football unites in the face of adversity.