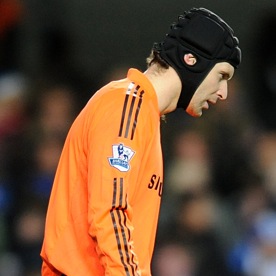 It’s getting to the stage with Petr Cech where an increasing number of Chelsea fans are saying it’s time to either drop him, or even sell him (the latter is crazy talk, in my opinion).

Cech is still a very good keeper, but he has made a few major errors in recent games, resulting in jeers from some of his own supporters.

I don’t think he helps himself by continuing to wear the padded helmet. Keepers need to be big and strong, or at least appear so; Cech is big and strong but wearing the helmet is, frankly, a sign of weakness that opponents will continue to look to capitalise on, especially from set pieces.

Reports today claim that Chelsea are interested in signing Rob Green from West Ham, but there is no substance to the rumour and I don’t think Green would be an improvement on Cech.

What will Carlo Ancelotti do? I think the Italian will persist with Cech. But the Czech is running out of lives at the Bridge.

What would you do? Would you continue to pick Cech, drop him or put him on the transfer list?