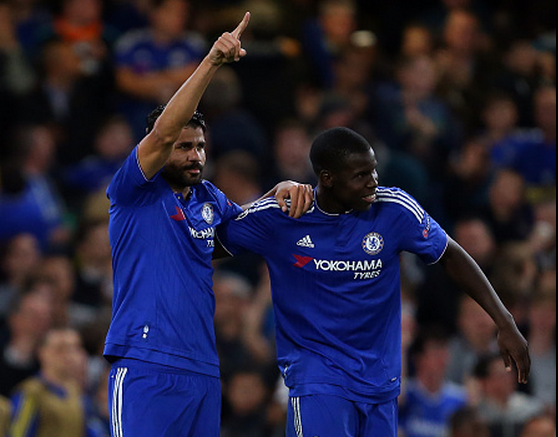 Kurt Zouma has come out in support of his much-maligned Chelsea teammate Diego Costa as the fallout from the striker’s contentious performance in Saturday’s 2-0 win over Arsenal continues to…well, fall out.

Althought, when we say “comes out in support”, what we actually mean is “inadvertently admonish as a cheat”.

Footage of Zouma’s post-match interview with BeIN Sport is currently being stripped from Youtube like wanno, but thankfully Eurosport were quick off the mark in the transcribing stakes.

It begins with BeIN Sports reporter Carrie Brown asking Zouma: “Of course Arsenal will feel hard done-by, they will claim you should have had a player sent-off in Diego Costa but this is a player that’s famed for riling other players isn’t it? Are you surprised that they reacted in this way?”

To which the Chelsea defender duly replies:

No, we’re not surprised because we know Diego. Everyone knows Diego and this guy likes to cheat a lot and put the opponent out of his game.

That happened in the (Arsenal) game but he’s a really nice guy. We’re proud to have him, like the other players, and we’re happy to win this game today.

Costa is currently waiting to hear from the FA disciplinary commission as to whether he will face retrospective punishment for his conduct against Arsenal.

We’d advise Kurt Zouma to keep his character reference to himself in the mean time.