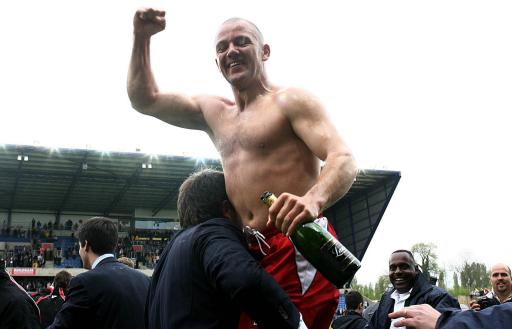 They may only be a Southern Football Premier League side, but the decision by Oxford City to sack player Lee Steele over homophobic Twitter comments he made will have a significant influence on the game in general.

In refering to the out-gay Welsh rugby player, Gareth Thomas, and his appearance on Celebrity Big Brother, Steele Tweeted: “I wouldnt fancy the bed next to Gareth Thomas #padlockeda**ehole”.

The club were quick to terminate the striker’s contract after learning of the remarks in a move that is sure to irk a lot of football fans who will no doubt defend Steele’s comments as being just “banter”. Except, we don’t accept racist “banter” so surely homophobic “banter” should be dealt with in a similar way.

Indeed, if I had my way, I’d ban the (over)use of the word “banter” completely. It smacks of Soccer AM and the Lineker/Shearer/Lawro/Hansen MOTD quartet of out-dated backslapping mediocrity.

City released the following statement: “The Oxford City board have decided to release Lee Steele in view of his recent comment via social media which is considered seriously contrary to the ethos of the club.”

Manager Mike Ford said: “On this occasion Lee’s had to pay for his error of judgement. He’s made a homophobic comment, that doesn’t necessarily mean he’s homophobic.”

Steele himself has yet to comment but it’s a positive development in the fight to make football welcoming to everyone.

Although one wonders if the fact that Steele was well past his best, at 38 years of age, made the decision by the club that little bit easier?