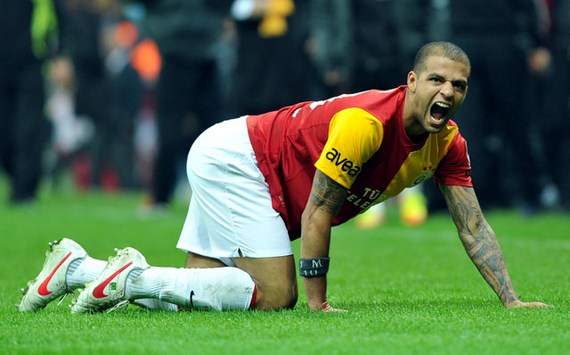 Galatasaray have just confirmed that an ‘incident’ involving Felipe Melo and Albert Riera cracked off during training today and is to be dealt with internally.

Said the Turkish side via an official statement:

“As the football team trained today an incident between Felipe Melo and Albert Riera occurred and the duo were sent to the changing room by coach Fatih Terim.

“In the dressing room, tension between the two continued.

“The club has a policy of dealing with disciplinary matters internally, and will act decisively, and promptly declare any sanctions.”

Only, it would seem it’s all a little more serious than that.

Reports are filtering through from the Gala camp that Melo and Riera started swinging for each other after the former went in overly hard on the latter during a practice game.

The fight was then broken up by the other players only for Fatih Terim to send the players home early. The two then returned to the dressing room before the fighting began again.

Riera was apparently then sent to the local Bahçelievler Medical Park hospital ‘with blood all over his face.’

Afraid we can’t be more specific as things stand though, seeing as we’re dealing with ‘completely apeshit on a good day’ Melo here, we wouldn’t be surprised to learn that Riera had been skinned alive.

More when/if we get it.