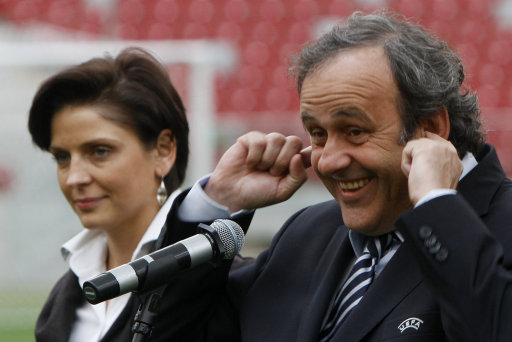 Forever in touch with the common-or-garden football fan, UEFA bigwig Michel Platini has revealed that he is pondering a radical rethink of the 2020 EUROs, with cities all over Europe hosting games. The star of the 1984 Euro Finals said:

“It could be either one country and 12 stadiums or one stadium in 12 or 13 cities. This matter will be discussed very seriously.”

When the issue of cost for fans was raised, Michael O’Leary… I mean Michel Platini is reported to have replied:

“There are low-cost airlines these days.”

Glad to see the UEFA top brass have their chubby, gold-heavy fingers on the pulse of the game.

I can see it now – Ryanair charging an extra £10 for passengers wearing a football jersey and £5 for a football scarf. Although surely no-one would mind if they added a £1million tariff for groups of England fans carrying brass instruments and drums.