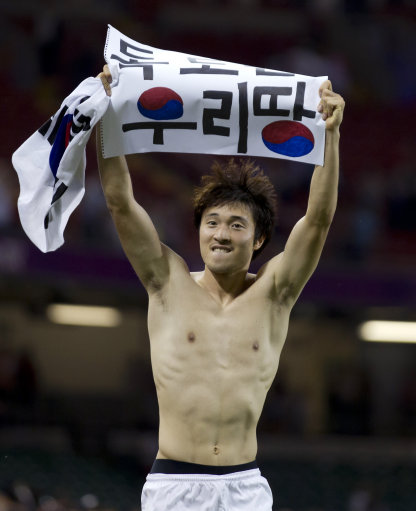 South Korea’s Park Jong-Woo has been denied his bronze medal for the crime of holding aloft a political banner after his country’s 2-0 victory in the Olympic third-place play-off game against Japan.

The banner reads “Dokdo is our Territory,” referring to a group of largely uninhabited islands (known as ‘Dokdo’ in Korea and ‘Takeshima’ in Japan) which lie in an area of rich fishing grounds and natural gas deposits and over which both countries claim sovereignty.

Unfortunately for Jong-Woo, FIFA statutes prohibit political statements being made at its football matches and the IOC also have similar guidelines – so both have launched an investigation into the midfielder’s little protest.

“Park Jong-Woo’s protest came hours after South Korea’s president, Lee Myung-bak, paid a surprise visit to the islands. The visit infuriated Japan, which withdrew its ambassador from Seoul in protest.

“Olympic officials asked South Korea’s Olympic committee to take action against Mr. Park, 23, while it investigates, and the Koreans responded by preventing him from taking part in the medal ceremony on Saturday.

“Mr. Park’s 17 teammates received their medals at Wembley; his absence was not noted to the crowd of more than 80,000.”

Apparently, Jong-Woo was merely handed the banner by a member of the crowd and paraded it around the pitch without actually checking what it said – believing it to be a South Korean flag.

He’s got until August 16th to try and prove to FIFA and the IOC that that was the case.