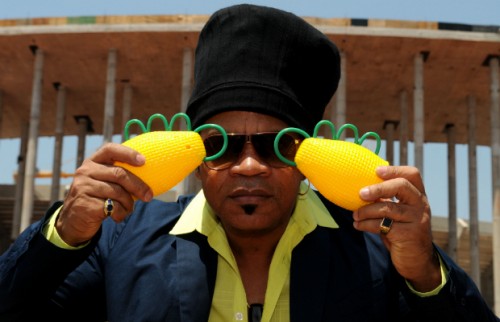 After casting their collective mind back to the 2010 tournament in South Africa and recalling just how fondly people took to the vuvuzela’s incessant moronic honk, World Cup 2014 hosts Brazil have come up with their very own infernal instrument with which they hope to drive football fans around the world totally and utterly insane.

It’s called a caxirola and it’s a little plastic handheld capsule full of pellets that is shaken by the virtuoso playing it to create a percussive rattle. How great is that going to sound once it’s multiplied by 60,000?

The caxirola has been designed in a collaboration between Brazilian musician Carlinhos Brown (that’s him up there) and the country’s ministry of sports, who have specifically honed the sound to be “less grating” than the maddening din created by the vuvuzela.

Great. Now every single game at the 2014 World Cup is going to sound like a shopping trolley falling down a flight of concrete steps.