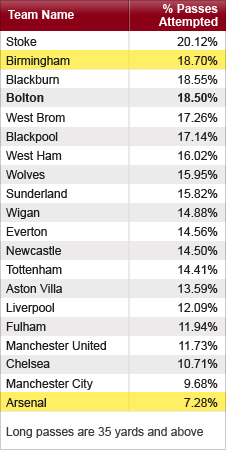 Stoke City have the tallest squad in the top flight (and one of the tallest in Europe), very much by the design of apparent rugby fan Tony Pulis. One fifth of their attempted passes are hit longer than 35 yards. 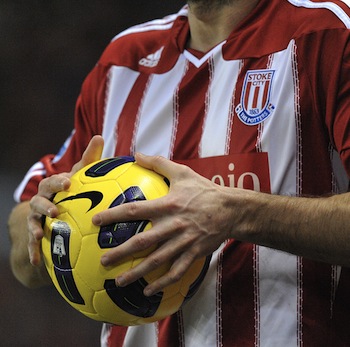 The four sides who attempt the least long balls occupy four of the five bottom places in this particular table (Tottenham play more long balls than the other top sides, mostly because they have Peter Crouch). In a league  where long-ball football is rewarded, Arsenal would be relegated every time. And if the Gunners do win the league, as I think they will, then Wenger’s football ethos will gets its rich reward.

Conclusion: Long-ball football is the most effective way of becoming a mid-table, survival-focused club. Playing a more attractive game is a double-edged sword – if you have lots of money and can afford very good players, the shorter game often works like a charm. But for sides such as Wigan, Fulham and West Ham, not relying on dangerous – and danger-clearing – long balls can really backfire.