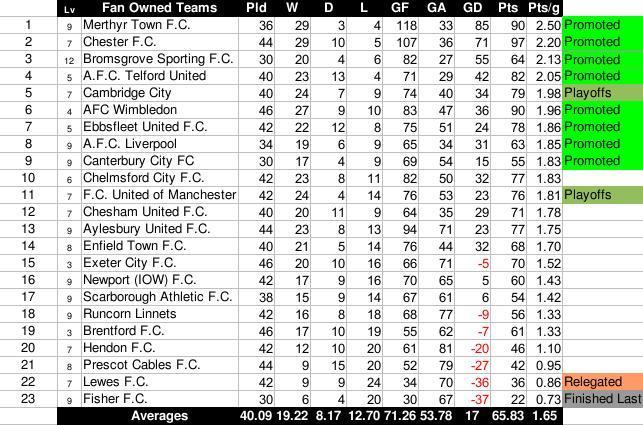 The ‘level’ column indicates the tier that each club is playing in as of 2011/12, i.e, after securing promotion, AFC Wimbledon are now playing in League Two – the fourth tier.

While not a league unto itself, the table works on the basis that every club has been ranked on an ‘average points per games played’, i.e, if one club wins one game (three points), draws one game (one point) and loses one game (no points) they would finish in the middle of the table with an average total of 1.33 points – four points divided by three games.

According to the table, the average number of points amassed per game by fan-owned clubs was 1.65 – comfortably above the ‘average’ tally.

Of the 23 fan-owned clubs, seven were promoted (either automatically, through the play-offs or by changes being made to higher leagues) while two made it to the play-offs without going up. At the arse-end of the table, one team was relegated and another (Fisher FC of the Kent League) finished dead-last without going down.

The 2011/12 list contains two new fan-owned clubs (bringing the total number in the English league system to 25) and, with the season just a few weeks old, the average points haul is still hovering around the 1.65 mark.

It may be a small-scale ownership model that just wouldn’t translate in the upper echelons of the league pyramid, though the good news to take away is that supporter ownership – with the goodwill and ready-made fanbase it brings – is perfectly sustainable in and around the lower leagues.

Muchos gracias to One Salient Oversight for doing all the donkey work on this one, and thanks to Pies fans Richard for bringing it to our attention.