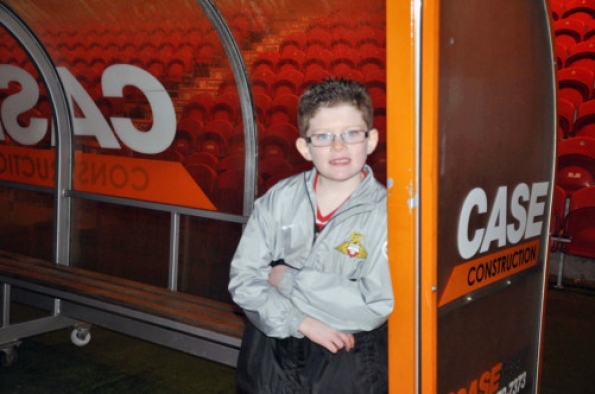 The intrepid little urchin you see before you is eight-year-old Mac Wilson who, if everything goes to plan, may just be the Doncaster Rovers manager the next time you see him.

Eight-year-old Wilson, a mad keen Donny fan, applied for the club’s managerial vacancy via email after Dean Saunders left to take the helm at Wolves ten days ago and chairman John Ryan was so impressed with Mac’s plan to get the club promoted to the Premier League inside three years that he invited him along for an interview at the Keepmoat.

According to his Dad, Adi Wilson, young Mac was left “gobsmacked” when Mr Ryan responded to his application informing him that he would be the chairman’s guest of honour for Rovers’ game against Leyton Orient in League One this weekend:

“We sent the email off as a bit of fun, then the phone rang! I answered it and couldn’t believe it when John said he was getting in touch with Mac about the manager’s job.

“I put Mac on and he thought it was a wind-up, convinced his older brother was playing a trick on him. He went a bit shy but Mr Ryan was obviously very impressed and said he wanted him to come in for interview.”

“Mac actually put in his letter that he will get us in the Premier League in three years – I thought that was a very positive statement.

“I was a mad Rovers fan when I was eight and would have loved it if the chairman back then, whoever it was, had contacted me – I would have been in awe. It’s nice when you do things like that because people do remember.”

Mac will also meet the Doncaster players before kick-off, watch the game from the directors’ box and then be ‘interviewed’ for Donny’s managerial post by Ryan himself before being given a tour of the premises.

(Image: Doncaster Free Press/Thanks to Pies fan Anonymous for the tip-off! Much obliged)