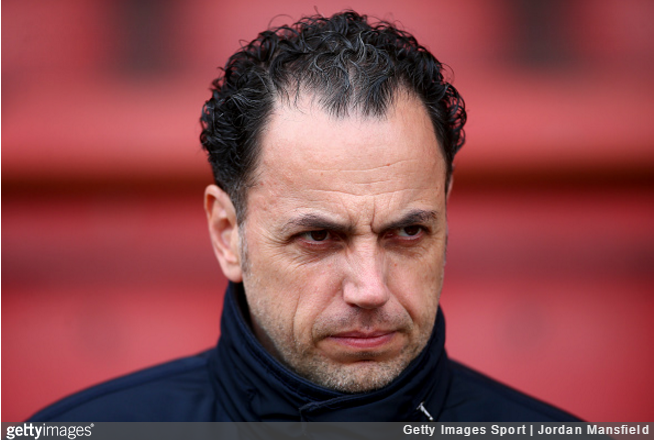 Fitting that on the very day Donald Trump became inaugurated as President, Leyton Orient’s beloved chief executive Alessandro Angelieri used a club statement to embark upon a bitter, pompous, narcissistic diatribe of his own.

For the uninitiated, Orient are a bit of a shambles and have been for a couple of years. They are owned by self-anointed ‘club president’ Francesco Becchetti, who has successfully guided them from the League One play-off final to the bottom recesses of League Two since taking over in 2014.

Becchetti, for the record, is the man who attempted to turn the club into an Italian reality TV show not so very long ago. He also once punished the team for losing a game against Hartlepool by forcing them to stay in a nice hotel for a week at his expense.

And so, the statement (seemingly produced in conjunction with Google translate) – which Angelieri used to defend Becchetti’s reign while also criticising Orient fans for protesting against the Dear Leader and slipping in the news that his boss has decided to sell the club if possible.

Here it is, in full, as it appears on the official Orient website:

The actions of the club over the past two and a half years have always been in good faith and that can never be doubted.

A squad without future was inherited, and has been completely renewed with it today including a number of talents aged between 17 and 24.

Mr Becchetti did not like the fan protests because at the beginning of the season everyone, supporters included, praised the club for their summer transfer business.

I think that within common sense, Mr Becchetti will continue to fund the club, though appropriate offers for the club will be considered.

One offer has been received, but it was not acceptable for a number of reasons.

Angelieri then went in on Orient’s players, criticising several former members of the team who have left the club such as Jordan Bowery, who was recently loaned out to Crewe after an “imperceptible” start to the season.

In regards to player departures, since last February Jay Simpson had scored six goals, and from last summer he had been trying to leave the club.

Andy Edwards (the club’s current manager) rightly decided to leave him out of the squad because of his lack of commitment to Leyton Orient.

Jordan Bowery’s contribution during the first half of the season was imperceptible, so his departure can be considered neutral, while Alan Dunne was out of the plans under both (former manager) Andy Hessenthaler and Andy Edwards.

After listing a number of youth and academy players who have come into the first-team frame of late, Angelieri made sure to crowbar in another jab at the senior pros they’ve been replacing.

These [youngsters] are players with fantastic qualities, and have a massive desire that was lacking from players in the past like Darius Henderson, Jobi McAnuff and Jordan Bowery.

Then back onto Dear Leader Becchetti and how sorely Orient’s dilapidated team miss his “great charisma” when he’s been away on business.

I think that my absence due to ill health could have had some negative effect, but I believe even further that the absence of Mr Becchetti during the last three months has had a more negative impact on the squad.

His personal business did not allow him to be close to the team, when he would usually come to the training ground every Friday and to the games on a Saturday.

Mr Becchetti has a great charisma and the players definitely feel his absence.

We are fully confident that we will remain in the Football League come the end of the season but if relegation was to unfortunately happen we will keep our current policy in place of promoting and showing faith in young players.

In summary, everything we’ve been doing is marvellous and all the club’s problems are the fault of everybody else.

President Trump, eat your heart out.