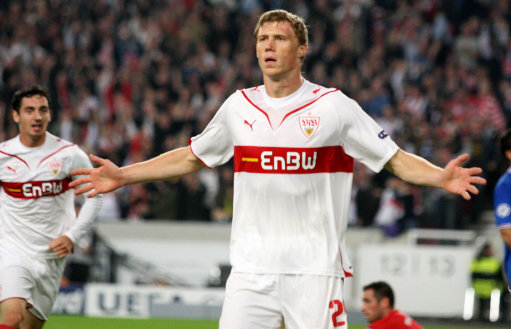 With a name that makes us all thank the stars for ‘copy and paste’,  Pavel Pogrebnyak looks set to move to west London in one of the biggest deals so far in this rather moribund transfer window.

The Russian international striker has never been the most prolific of strikers, however, the imposing forward is best utilised as a targetman who can hold up the ball, and he’ll no doubt be confident of making a (hard-to-spell) name for himself at Craven Cottage. Although with Bobby Zamora, Clint Dempsey, Bryan Ruiz and Andy Johnson all pushing for a place, there’ll be no guarantee of first team action for the former Stuttgart man.

Indeed, looking at how Pogrebnyak’s fellow countrymen and those from the other former Soviet republics have faired in the Premier League, the forward will buck the trend if he succeeds with the Cottagers. Attackers  Sergei Rebrov, Andriy Shevcheko, Andriy Voronin, Roman Pavlyuchenko and Andriy Arshavin have all either flattered to deceive, or just downright deceived in their time in Blighty.

Indeed, other than Andriy Kanchelskis, Georgi Kinkladze and goalkeeper Mart Poom and have there really been any genuine Soviet successes in the Premier League?

Fulham boss Martin Jol will be hoping for his sake that Pogrebnyak will be another rare Russian success story.