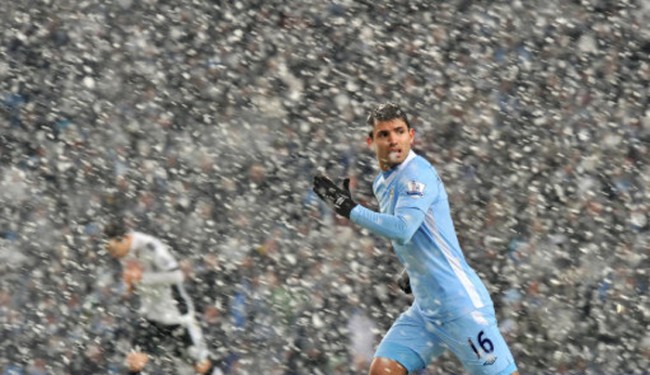 Manchester City put the disappointment of that midweek defeat against Everton behind them at a snowy Etihad Stadium on Saturday, coasting to victory against a Fulham side who rarely threatened Joe Hart’s goal.

In a game peppered by stoppages so ground staff could clear the snow off the pitch, City look menacing every time they got forward but eventually took the lead on 10 minutes courtesy of a very soft penalty. Adam Johnson “made the most” of contact in the box from Chris Baird and Brede Hangeland, going down easily to win his side a spot-kick which Sergio Aguero deftly converted.

City’s second goal was another case of misfortune for the Cottagers, with Baird putting through his own net from Johnson’s cross/shot. However, Roberto Mancini’s side deserved to be a couple of goals up after a succession of superb attacks.

The visitors’ best efforts came courtesy of Clint Dempsey and Simon Davies, but on 72 minutes, City made it three, with Edin Dzeko firing home after excellent work from Aguero.

The home side did hit their own post late on when Dzeko deflected a Bryan Ruiz cross off the woodwork but City were good value for their victory, and even managed to hand new-boy David Pizarro a debut.

So the Citizens go three points clear at the top, at least temporarily, while Fulham are now seven points clear of the drop-zone.