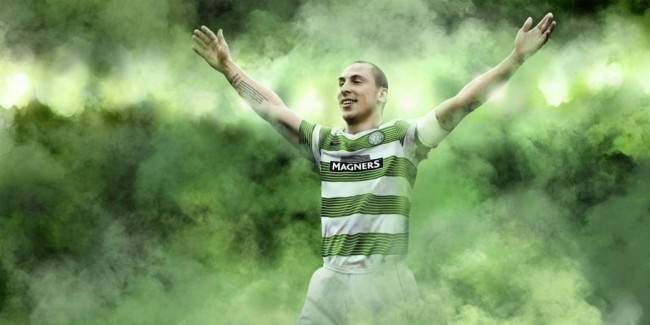 Zut alors! The new Celtic 2013/14 home shirt is so goddamn hoopy that even the hoops are hooped. Indeed, why they didn’t have Gary Hooper modeling it for them is a bit of a mystery. Can’t beat a bit of four-fold hoopage to really emphasis the hoopiness.

“On the new home shirt, each of the club’s iconic green hoops is made of up seven smaller hoops, which are inspired by some of the club’s greatest players — such as Jimmy Johnstone and Henrik Larsson, who wore the No. 7 shirt.

“The shirt features a modern crossover V-neck collar, and a woven label inside the neck features a quote from former Chairman Robert Kelly: “This Celtic Football Club is much more than a football club. To a lot of people it’s a way of life.””