Segunda Division B (the Spanish third tier) club La Hoya Lorca have just got round to launching their new strips for 2013/14 and, while the blue-and-white-striped home design is perfectly nice in neat, sober kind of fashion, it’s definitely the new away kit that is grabbing all the attention today – for, you see, it’s made of broccoli… 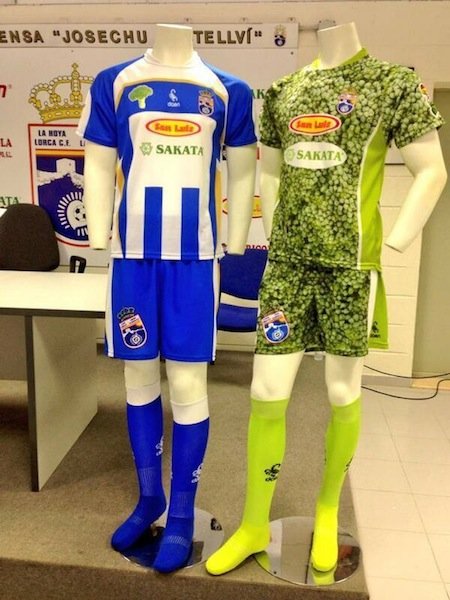 There is method behind the madness however, as La Hoya Lorca have chosen to pay tribute to local region of Murcia (colloquially known as “The Vegetable Garden of Spain”) and its agricultural prowess – broccoli apparently being on the area’s most abundant and successful exports.

The club actually first wore their broccoli away kit last year and went on to win the Tercera Division and get themselves promoted up into the league above so, in a bid to keep the good luck rolling in, decided to keep the broccoli motif while sprucing up the design a bit.

As a result, fans have now begun referring to the club as “El Brocoli Mecanico”, i.e, The Clockwork Broccoli!

(Image: @LaHoyaLorcaCF/World class spot from Brooks over on Dirty Tackle)