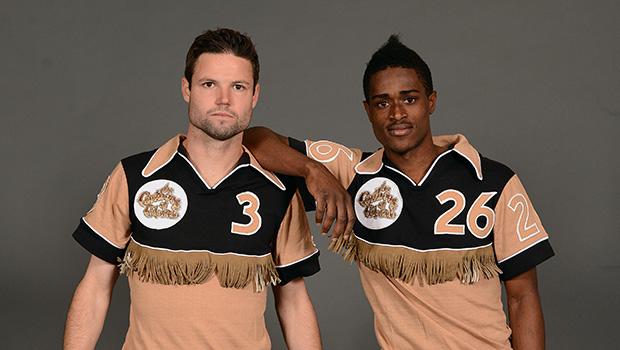 We’re a day late on the uptake here so forgive the tardiness but, as an April Fools Day jape, MLS side Colorado Rapids announced yesterday that the team were to wear the infamously shite 1978 kit of their NASL predecessors, the Colorado Rapids (the one with the leather rodeo fringe), on a one-off basis for a future match.

The Rapids website reported that the kits, long thought to have been lost/ritualistically burnt/ thrown into an active volcano, had been unearthed in storage at the ranch of former Caribous owners, the Guercio Family – also adding that the Rapids may wear the rodeo jerseys for their next home match.

They even had their poor players pose in the godawful strip just to add that extra bit of authenticity, though midfielder (and Colorado native) Brian Mullan obviously enjoyed himself…

“It is a true honor to emulate those pioneers of American soccer” -Brian Mullan http://t.co/z2zlTRhbQC pic.twitter.com/Q1GrIwoUXF

Sadly it was all a ruse – a glorious, glorious ruse!

(Image: Colorado Rapids/many thanks to Pies fan wowza for the nudge!)