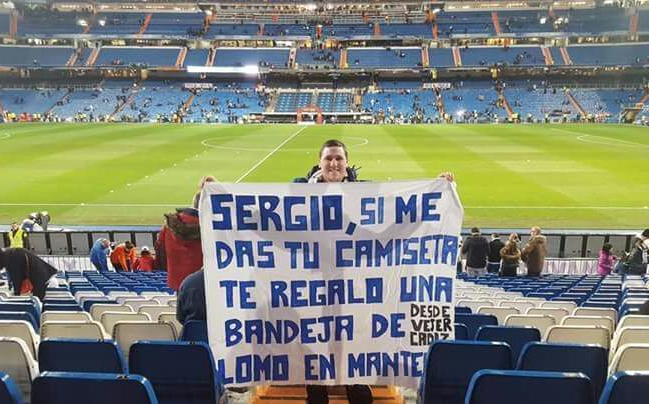 The fan, seen above, held a banner aloft in the stands at the Bernabeu that read, “Sergio, if you give me your shirt, I’ll give you a tray of lomo en manteca.”

Should you be wondering, lomo en manteca is an Andalusian delicacy which basically consists of pork loin smeared in lard.

Funnily enough, the banner obviously caught Ramos’ eye at some point during the night, as the Madrid man sauntered over after the final whistle to make the trade…

The fan was subsequently identified by local media as a bloke by the name of Sergio Sanchez, who hails from the town of Vejer de la Frontera in southern Spain.

“Sergio asked for it twice. He didn’t want to leave without it,” he told CSN Cadiz.

Sure enough, Ramos left the pitch with his dinner safely secured…

A positively delicious shade of neon orange, no?