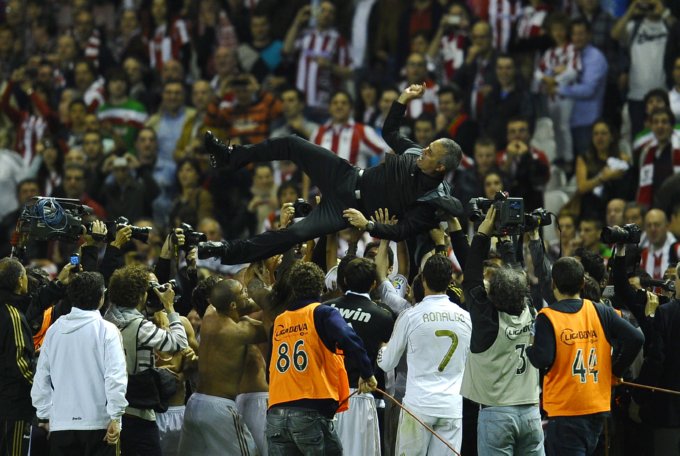 Mission accomplished: It’s been pretty much done and dusted for a week or two now, but Real Madrid assured their 32nd La Liga title and their first in four years with a win over Athletic Bilbao at San Mames last night.

With Barcelona having beaten Malaga 4-1 in the earlier kick-off (with Lionel Messi surpassing Gerd Muller’s European record by scoring his 66th, 67th and 68th goals of the season), Real Madrid new a win would do it, and win they jolly well did – Gonzalo Higuian, Mesut Ozil and Cristiano Ronaldo all netting in a fairly routine 3-0 victory over ten-man Bilbao.

Mourinho’s side have also shattered the La Liga scoring record this term, racking up 115 goals so far (record was 107) and conceding only 30 – also becoming the first team to boast three players reaching the 20-league goal mark in a single season; Ronaldo (44), Higuain (22) and Karim Benzema (20).

Mou got the Pep treatment after the final whistle…

While we’re talking records, if Madrid  – who have only lost twice all season – win their final two games they’ll also reach 100 points, surpassing Barcelona’s previous record of 99 set in 2009/10.

Which, you don’t need me to tell you, is completely absurd.