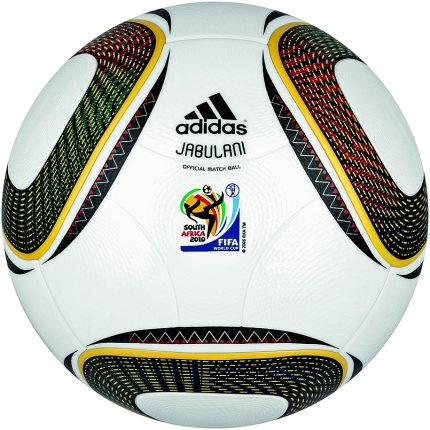 Well, they say there’s no such thing as bad publicity, but a host of World Cup stars are doing their best to deflate the Adidas Jabulani official match ball…

“The ball is dreadful. It’s horrible, but it’s horrible for everyone.” – David James (England, goalkeeper)

“The ball is a problem. You can’t anticipate which direction it is going to go in. It is difficult for defenders to deal with and you can’t take your eye off the ball until the very last second.” – Marcus Tulio Tanaka (Japan, defender)

“The new ball is not decent, not just for goalkeepers but for everyone. Its trajectory is unpredictable.” – Gigi Buffon (Italy, goalkeeper)

“It’s very weird. All of a sudden it changes trajectory on you. It’s like it doesn’t want to be kicked. It’s incredible, it’s like someone is guiding it. You are going to kick it and it moves out of the way. I think it’s supernatural, it’s very bad.” – Luis Fabiano (Brazil, forward)

“Maybe they should stop trying to keep developing the ball and just change the look of it. The ball goes all over the place.” – Seigo Narazaki (Japan, goalkeeper)

“It’s a little sad that in a competition as big as the World Cup to have such a poor ball. It’s not just the goalkeepers complaining, but the outfield players as well.” – Iker Casillas (Spain, goalkeeper)

“It’s a catastrophe. I played with many different balls, some of which wiggled or changed directions, but this one is the worst of them all.” – Vladimir Stojkovic (Serbia, goalkeeper)

“It’s a disaster… It moves so much and makes it difficult to control. You jump up to head a cross and suddenly the ball will move and you miss it!” – Giampaolo Pazzini (Italy, forward)

Nothing new here, and lots of goalkeepers moaning as always, but it does seem the Jabulani has come in for more criticism than previous World Cup balls.