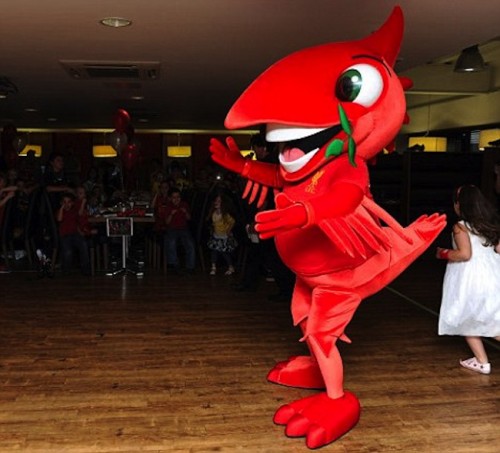 LIVERPOOL have a new team mascot. He’s Mighty Red. Legend has it that Mighty Red is a massive sunburnt Liver bird. Others say he’s a demented puffin who nods to Liverpool great Phil Thompson and smiles at Emelyn Hughes.

The velour-coated bird is sure to be a hit at Anfield. Already he’s wowing the kids.

The Liverpool FC website reports on the sensation when Mighty Red arrived at an Anfield do for 50 junior Liverpool fans. The money quote is provided by six-year-old Daniel from Wavertree, who is either on-message or displaying a neat line in sarcasm:

“I couldn’t believe it when he walked in. My mum said there might be a special guest but we weren’t expecting to see Mighty Red today.”

Well, how could he have. Mighty Red has only just been invented. As for that special guest…