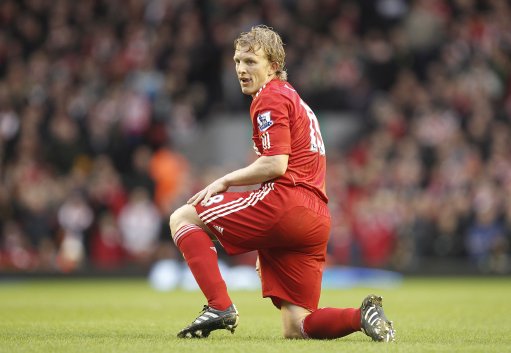 Perhaps an indication of the ‘short-term’ nature that has engulfed everything pertaining to Liverpool FC over the past few years, it seems that one win over a patchy Wolves outfit has transmogrified a universally panned rabble into a fluid unit akin to that of the legendary 1970’s Dutch national side – at least as far as ‘Deadly Dirk Kuyt is concerned, who also jibed former manager Roy Hodgson’s slightly ‘agricultural’ approach:

“[Playing under Dalglish] comes close to the old Dutch style. Playing with early pressure on the opponents and a passing game with the ball low on the ground. Not all those long balls any more.”

Let’s not get carried away quite yet Dirky old bean.

An impressive performance and a thoroughly deserved victory (capped by an absolute cracker of a volley from the ever-improving Raul Meireles), with plenty of positives to be garnered (a brace for Nando, Poulsen wasn’t awful, Steve Clarke is obviously some kind of genius) – but not quite in the realms of Cruyff, Neeskens et al quite yet, eh?