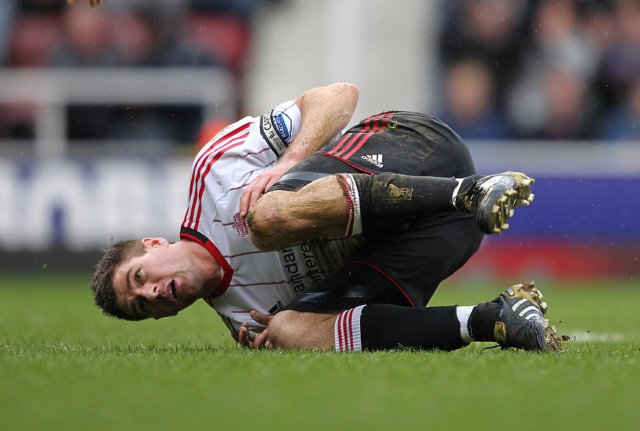 The Mirror are currently running daily excerpts from journalist Brian Reade’s new book ‘An Epic Swindle – 44 Months With A Pair Of Cowboys’ and, so far at least, the snippets have proved to be a bit of a goldmine.

It’s probably worth mentioning that Reade is a staunch Liverpool fan and one of the men responsible for the ‘Dr Mr Hicks’ protest video (i.e, the one in which Echo & The Bunnymen singer Ian McCulloch claimed that having the Americans in charge of Liverpool was akin to watching his family getting raped) so his accounts are massively one-eyed and biased, probably ’embelished’ to a certain degree and possibly even completely fabricated – but they certainly make for good copy, and we all know that’s what really counts.

“As George Gillett digested the words he was reading, the blood drained slowly from his face.

“Surely there was a misprint in this report about Steven Gerrard marrying his long-term partner Alex which completely changed its meaning.

“He read it again but it came out the same, so he phoned his co-owner: “Tom, there’s something you need to know. Our team captain is gay.”

“A bemused Hicks asked for the evidence and when Gillett read it to him, in between guffaws, he explained that in England the term ‘partner’ can refer to a member of the opposite sex.

“Their captain wasn’t tackling for the other side. Alex was a woman.”

Reade also claims that Gillett had little to no idea how the European transfer system works, a fact that has since become abundantly clear:

“Gillett’s favourite phrase, when Benitez tried to pin him down on his transfer budget was:’ I’ll give you £50 million plus whatever we get in the draft’, which was so nonsensical it almost had Benitez butting walls.”

If Reade is to be believed, then it’s little wonder that Liverpool were in the toilet and Rafa was stark-raving doolally by the end of the rootin’-tootin’ tycoons’ reign.